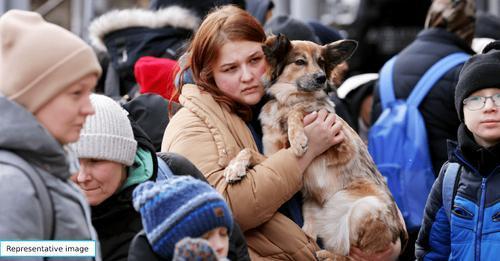 A courageous woman recently made news for her amazing display of bravery and love when she practically carried her cherished dog from the war-torn Ukraine across the border.

Prior to the conflict, Alisa Teptiuk, 35, had already suffered a substantial loss. On February 23, the day before Russia invaded Ukraine, she lost her father.

She was obliged to pack up her life and find a way out of the nation while dealing with horrible grief and attempting to make arrangements for the death of her father as Russian soldiers drew closer. 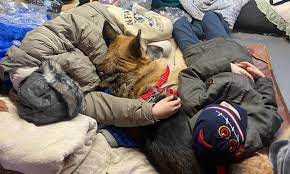 “My husband and I were attempting to sort out funeral documents from all around the city to bury Dad as many people were departing Kyiv,” she explains.
“We traveled from the mortuary to the funeral home, the prosecutor’s office, the registry office, then back to the morgue and funeral home. Tanks were moving across the city as sirens sounded from all directions.

Teptiuk was lucky in that, as a programmer employed by a German company, her boss assisted her in arranging travel to Poland.
She then took the nearly 100-mile trek to the Ukrainian border in a compact Peugeot 307 with her husband, seven additional family members, and two enormous dogs.

The family spent 16 hours traveling before arriving at a little town with just over 10 kilometers left till they reached Poland.
Even in the village, according to Teptiuk, “we chose to leave the community later in the morning since it was unsafe.” We couldn’t stay in the car for the following three or five days near the Polish border, so we made the decision to walk the final 17 kilometers (10.5 miles) to the border.

“We departed at 4 am; the temperature was minus seven. It was a difficult journey through rivers and mountains. The cold was causing my children to cry. It was my idea to travel to the border, so even though I wanted to cry, I couldn’t. 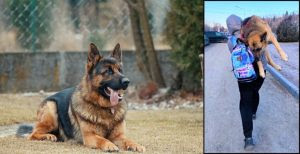 She soon began to struggle as well with one of her dogs. A huge 12-year-old German shepherd named Pulya had trouble walking and periodically fell over and couldn’t get back up.
Teptiuk would stop cars and ask for help as they passed, but the already crammed passengers couldn’t help them and even said they should leave the dogs behind.

The devoted mother and her family were unable to comprehend such a deed, even as the old dog strained to walk by itself.
Teptiuk asserts, “We couldn’t leave her behind.” “Pulya is family; after spending a lifetime with us, she is old and grey. At approximately four months old, we bought her on the first day of my maternity leave.
“With us, she has experienced both the happiest and the darkest times in life. She appreciates and loves who we are, and we will do everything in our power to take care of her and keep her secure. Nobody could persuade us that Pulya could be abandoned. We had not even considered it because it was not conceivable. 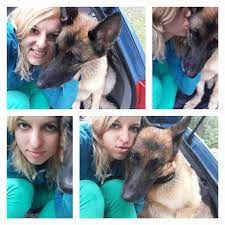 Instead, for the final 10 miles to the Ukrainian border, Teptiuk and her husband alternated carrying the sick animal on their shoulders. Later, a video of the brave act was uploaded to social media.
Teptiuk claims, “I snapped a picture without giving it much thought. “I guess all I wanted to do was record the moment. But now I am aware of its rarity. It conveys to the world our adoration and fidelity. We’re just a regular family that cares about one another.

Teptiuk and her family, together with their pet Pulya, who has become their “one constant in all of this crazy,” fortunately made it over the border safely.

Even so, their battle is far from over. She continues, “A lot of my pals are still in Ukraine, in Kiev. Some of them are housing small children in bunkers in Kharkiv. I simply cannot fathom how they must be feeling right now.