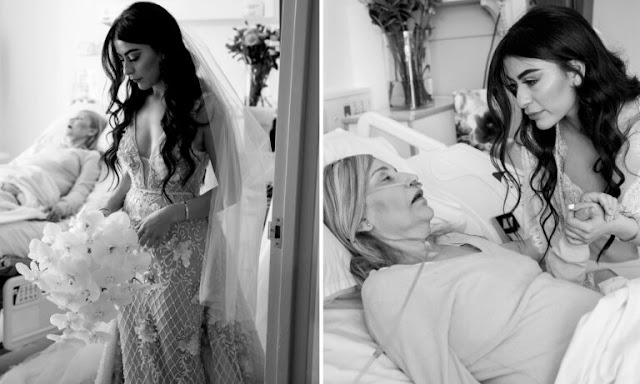 When she knew her mother didn’t have long to live, she decided to shift the wedding to the hospital chapel.

Elizabeth Basoski did not initially intend to get married at a medical facility. But when given the option of having the wedding she had first imagined or having her mother at her side, she made a simple choice. Wedding postponed due to ill mother.
Ivo and Elizabeth were only a few weeks away from being married when some tragic news was delivered.
Magda, Elizabeth’s mom, was admitted to the hospital. The physicians here say that this ailing woman has very little time left on this planet. She had to make a challenging choice. The bride either changes the date and venue of her wedding or decides to hold it as is despite the fact that she knows her mother won’t survive long enough to attend.

A post shared by A R I A N A (@arianaphotographystudio)

The decision was straightforward for the loyal daughter. She would move Heaven and Earth to be by her mother’s side.
Elizabeth and Ivo started working in a race against time as a result. They were able to reschedule their wedding. It was also an option to transfer the wedding to the hospital chapel where her mother is receiving care.
We’ll have one last party together.

Given the circumstances, the couple received a lot of support when they postponed their wedding.
The wedding professionals worked together to respect the couple’s change of plans, and Ariana Photography beautifully captured the emotional, tragic moments.
On that day, everything came together brilliantly. Despite being confined to a hospital bed, Elizabeth’s mother was able to attend her daughter’s special day. In her mother’s hospital room, Elizabeth Basoski dressed and prepared herself.

The hospital bed for the ailing mother was then moved into the chapel so she could see the lovely wedding.

A post shared by A R I A N A (@arianaphotographystudio)

The very next night, the mother departed to be with the Lord. Nevertheless, not before toasting her daughter’s nuptials.
Despite the fact that it did not turn out precisely how Elizabeth and Ivo had hoped, the fact that Elizabeth’s mother was present made it the wedding of Elizabeth’s dreams.