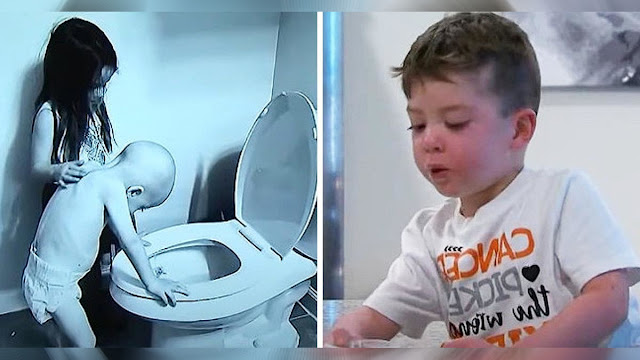 With a series of images she shared on Facebook in September 2018, a Texas mother of three unintentionally altered the public’s perspective of childhood cancer. Photographer Kaitlin Burge captured her daughter Aubrey consoling her younger brother Beckett in a natural moment. This was not, however, a straightforward instance of consoling a sibling after a skinned knee.
In April 2018, Beckett received a diagnosis of acute lymphoblastic leukemia. The 4-year-old changed from a boisterous toddler to a weak sick in a matter of months. 5 year old Aubrey remained at her brother’s side. Burge remarked on the impact Beckett’s treatments had on their relationship as siblings in her essay.

In her letter, she said, “How often do you hear about the hardships families with additional children face? You always hear about the financial and medical struggles.” Aubrey is seen stroking her younger brother’s back as he throws up in one of the two remarkable images of her children that she posted. Rarely is pediatric cancer presented from such a distressing perspective.

“My two kids, who are 15 months apart, went from playing in class and at home to sitting in a chilly hospital room,” Burge added. My then 4-year-old watched as her brother was transported to the intensive care unit. He lay there powerless as she observed a dozen physicians put a mask over his face, prod and jab him with needles, and inject him with a dozen different drugs. Young Aubrey was forced to observe and, more tragically, discover what was happening to her infant brother.
The older sister “saw (Beckett) struggle to play and to walk. She no longer knew the boisterous, vivacious, and outgoing younger brother; instead, she did now. Burge continued by describing the uncertainty her elder kid felt throughout this period of her brother’s therapy.

Apparently reluctant to shield her daughter Beckett from the reality, Burge was eager to mention her daughter Beckett’s treatment in her article. She said, “Children need support and togetherness, and should not be kept at a distance from the one who is unwell,” in an essay explaining her decision. Aubrey “spent a considerable bit of time, at his side in the bathroom, while he got ill” in the instance of Beckett. She stayed beside him. Whatever the circumstance, she looked out for him and supported him. They remain closer nowadays. She constantly looks out for him.
Burge focused on the specifics and the harsh realities of what this meant for the brothers and sisters. She painted an unvarnished portrayal of the children’s frail network of friends. Burge informed members of the Beckett Strong Facebook group that he was “vomiting between play sessions” without distorting the facts. waking up and feeling sick. While her brother is ill, she stands at his side and rubs his back.
Beckett finally overcame his disease thanks to the dedication of both his medical staff and his sister’s support. He had his final treatment in August 2021, two years after beginning it. The siblings have remained close ever since, preserving their strong relationship. They walk to and from school together, Burge said in an interview with TODAY Parenting about the admirable Beckett and Aubrey. They share a bed even though they each have their separate rooms. She expressed her utmost appreciation for their combined fortitude by remarking, “Those two have an unbreakable relationship.”