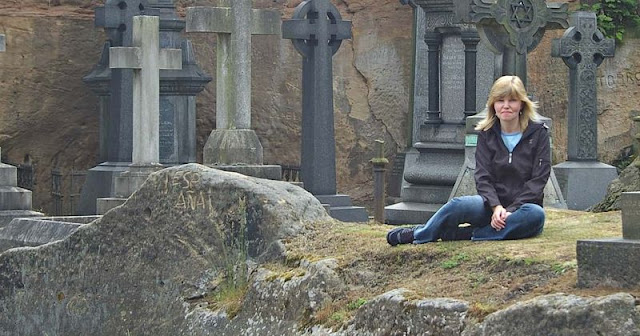 She declares, “I’m happy to be the person who attends strangers’ funerals when no one else can.”
The idea of death is quite weird. While for some people it is frightening and upsetting, for others it is an intriguing topic. Jeane Trend-Hill, 55, has always been fascinated with the idea of death and everything related to it, including cemeteries, funerals, and caskets. When Trend-Hill was only 20 years old, her mother Mary passed away at the age of 57. When she was only 14 years old, her father Joe passed away at the age of 56. She would spend hours sketching and photographing London’s expansive Victorian cemeteries.
But she didn’t begin attending funerals until she unintentionally walked into one in 2012. “I entered this lovely church and saw there was a service going on,” she said. A cemetery worker approached me and asked if I’d attend a funeral for a veteran who had no one else to pay their respects, so I complied and went along. “I was raised as a Catholic and told that it’s then bad to then leave, so I stayed and sat at the back. It was a complete stranger, but I was moved.”
She now claims to have traveled the world and been to more than 200 funerals of strangers. The staff at the cemetery Jeane frequented then asked her to go to the funerals of the deceased who had no family. “Now I’ve attended about 200 funerals for individuals I don’t truly know — although I have lost track of the precise number. I learned that everyone has a story to tell, everyone has had a life, and everyone should have someone around to remember them when they pass away.”
The London resident from Islington says she is pleased with her job. “No one should ever be cremated or buried alone,” she said, adding, “I’m proud to be that person who goes to strangers’ funerals when there is no one else who can attend.” Jeane, an actress, photographer, and artist, said, “I’ve always been fascinated with death since I was a child. ‘We would go to cemeteries, and I’d walk around looking at all the graves. They are like outdoor art galleries.”

Now that she finds cemeteries intriguing, Jeane spends time preserving and cleaning them. She also holds a Ph.D. in mortuary science and has visited several cemeteries across the world, including those in Paris and Venice. She works as a cemetery historian. The plaque honoring the late British architect Arthur Beresford Pite, who passed away in 1934, was also unveiled by the woman as she was dressed in a Victorian mourning garb.
On Facebook, people have already started contacting Jean directly to invite her to send-offs. She said, “The first thing I do when I go someplace is to find where the closest crematory is.” She claims her family even makes jokes about her being a “hire a mourner” and says, “If I’m asked and I can go, I would.” Of course, I’d never actually make somebody pay for my presence at a funeral, she remarked, “but it’s a term they given me and it’s a bit amusing. If people want me to, I’ll go to funerals dressed in a mourning outfit. She does this because, in her eyes, it is a means of returning the favor. Death has never concerned me; all I want to do is help others feel less afraid of it as a way of giving back.