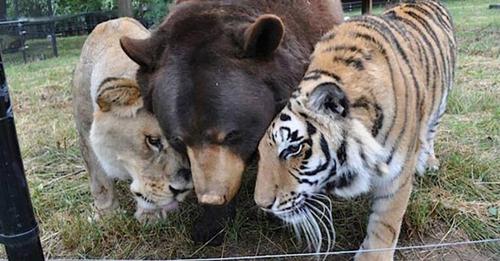 A lion, tiger, and bear were great friends for nearly 15 years, making for one of the cutest friendship trios you’ve ever seen. The unlikely buddies’ strong friendship was created after they went through a horrifying ordeal together at the start of their lives.
The story began in 2001 when the three cubs—a black bear named Baloo, a Bengal tiger named Shere Khan, and an African lion named Leo—were rescued from the basement of an Atlanta, Georgia, drug dealer. The three creatures were in dire need of assistance. 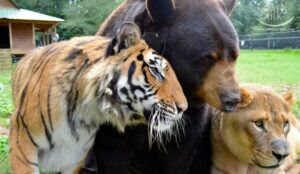 The three cubs were in terrible pain after being severely mistreated. Leo had wounds on his face and was living in a tiny cage, Shere Khan was severely undernourished, and Baloo was discovered wearing a leash that was so tight that it had cut into his flesh and had to be surgically removed.
It was distressing to find wild creatures living in such appalling conditions, but thankfully Noah’s Ark Animal Sanctuary in Locust Grove, Georgia, was able to save them. A 250-acre shelter for abandoned, unloved, and neglected animals is called Noah’s Ark. They are a nonprofit organization with the sole purpose of giving animals unwavering affection, unwavering service, a future, and hope. Over 1,500 animals from 100 different kinds are kept there. Just feeding them all runs $33,000 a month. 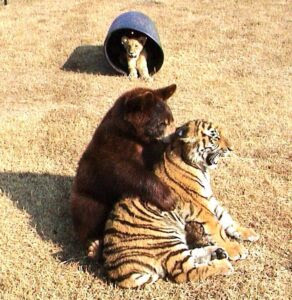 The cubs had been through so much by the time they got to the sanctuary that it was obvious they would never be able to be released back into the wild. The team soon came up with a strategy to let the three live out their days there in peace.
They received food, medical attention, and the chance to stroll around the grounds of their new residence. The caretakers gave them a lot of attention and allowed the cubs to stay together so they would feel safe and comfortable.
The cubs had a deep kinship from the start, and it was in their best interests to stick together. They played together, consoled one another, adapted to their new environment, and learnt how to take pleasure in their new home.
The staff had anticipated that as they matured, they would eventually outgrow one another and require separation, but that time never arrived. Before the first member of their trio, Leo, tragically departed away in 2016, they were together for fifteen years. In 2018, Shere Khan accompanied Leo to the bridge. 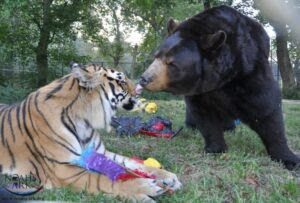 The team consoled Baloo, who had never been away from his buddies other than during the procedure to remove his harness. They made sure he wouldn’t feel alone and showered him with love. Even though he lost his pals, it’s consoling to know that they were spared awful cruelty and were able to spend their final years together in a secure atmosphere.