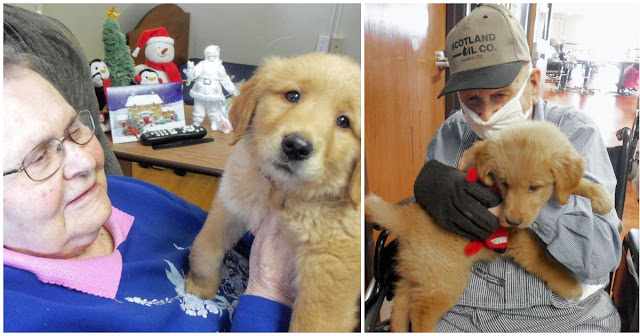 It’s never a terrible idea to watch a cute video of a beautiful animal whenever you’re feeling depressed, whether it’s a cuddly cat, a furry bear cub, or a priceless puppy. Residents of a retirement and assisted living home in Scotland, South Dakota may engage with a dog in person rather than just seeing recordings of them! Gracie, a golden retriever puppy, has established herself as a fixture at the nearby Evangelical Lutheran Good Samaritan Society, a retirement facility for older people.
Despite the problems and obstacles that the years 2020 and 2021 have brought, some older citizens have seen a brighter future. The newest pet at their assisted living home has been a ray of hope and made many of the residents happy. For a few nursing home patients, Gracie has quickly emerged as one of the highlights of the day because to her contagious smile and positive outlook.
Living apart from family may be difficult, particularly in unsettling times, which is why Gracie was introduced to residents at the Evangelical Lutheran Good Samaritan Society with the help of her owner who works there. In March 2021, when she was just 3 months old, she started making frequent trips to the retirement home. Since then, she has grown to be one of the most cherished visitors to date, bringing as many people to smile as she can.

According to a PEOPLE article from March 2021, Gracie was a wonderful friend for “people in their golden years of maturity.” Her owner Pam Stewart, who oversees social services at the institution in Scotland, South Dakota, brought her there. During the same month, the Evangelical Lutheran Good Samaritan Society published information about the facility’s new pet and stated that Gracie’s purpose is to “provide happiness and joy to residents and employees.” Gracie seems to be doing a great job based on this adorable footage of the golden retriever with the facility’s patients. 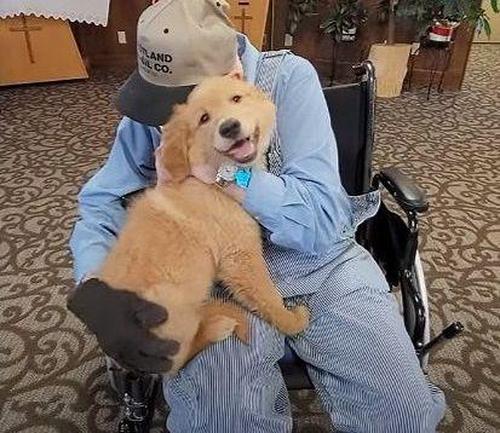 The golden retriever puppy was shown in the video snuggling with a few nursing home patients and making sure to shower everyone she saw with plenty of love and attention. She seemed to be a huge favorite of everyone she encountered, and it was obvious that the inhabitants felt the same way since they were always willing to play with or cuddle the cheerful canine.

According to PEOPLE, Gracie is constantly escorted throughout the facility by a staff member to protect the safety of both the puppy and her human buddies. Every day that she goes to work with Stewart, she normally visits 30 or more older residents. When their facility dog, Hope, passed away in November 2020, the residents had already experienced loss.

Since she arrived, there have been many adjustments, Stewart said Good Morning America. “We’ve witnessed a lot of hugs and grins. In contrast to what they have witnessed in the outside world, it gives them a lot to discuss. It is clear that Gracie has transformed into a ray of sunshine for the inmates of the nursing home.