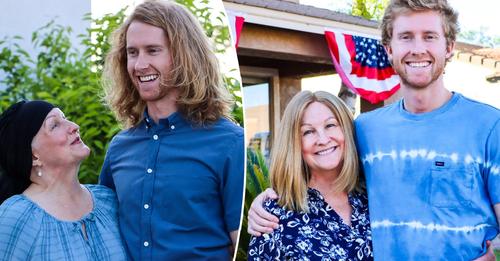 What was intended as a joke quickly evolved into maybe the greatest present a son could ever give his mother.
To help his mother, who lost her hair after receiving radiation, an Arizona man spent nearly three years growing out his hair.
It’s obvious, remarked Matt Shaha. “She originally gave me the hair.”

Melanie Shaha battled a benign brain tumor for many years.
“I have undergone two surgeries, in 2003 and 2006, for a recurring benign brain tumor and a pituitary tumor,” she stated.
She underwent two successful procedures to get it removed, but in 2017 when it returned, radiation treatment was advised.
I enquired, “Will I lose my hair?” to (my doctor). and they said “No.”
She lost her hair three months later.
She said to Today that when you don’t have hair, you stand out like a sore thumb and kind people might say things that hurt you. “I don’t mind being ill, but I don’t want to appear ill. In the store, I’d like to fit in than stick out.
Shortly after Melanie started losing her hair, her 27-year-old son made a joke about growing out his hair and making a wig for her.

Although that was a really sweet offer, Melanie didn’t want to burden her kid with that type of responsibility.

But Matt had a different perspective. The following 2.5 years were used to grow out his hair. He went to his mother’s house with a few coworkers and had his hair cut when it was the right length.

We were ecstatic, and as they began chopping, we sobbed, Melanie recalled.
He even paid the $2,000 to have the wig created when the time came.
A wigmaker who hand-stitched the hair was found by the mother and son team, and the result was a lighter and more comfortable wig. Melanie had the wig trimmed and styled once it was delivered to her.

It’s been about four years since my mother lost her hair, so seeing her in it was the first time I had seen her look that way.

It will be challenging to surpass her son’s gift, Melanie, who was smitten with her new appearance, admitted. It definitely fills your emotional tank.