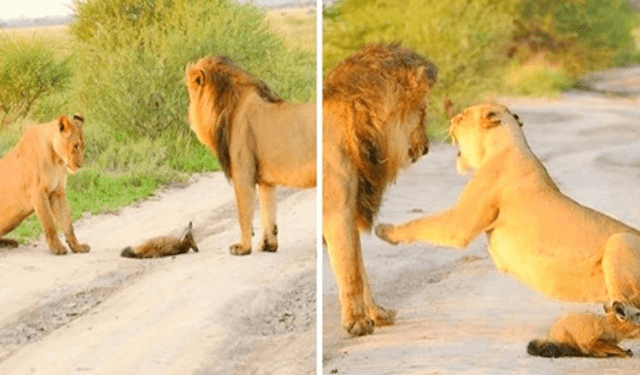 In Botswana’s Central Kalahari Game Reserve, an extraordinary incidence took place.
Photographer Graham Dyer took a number of pictures that shed fresh insight on how nature creatures of the same and different species interact and behave. 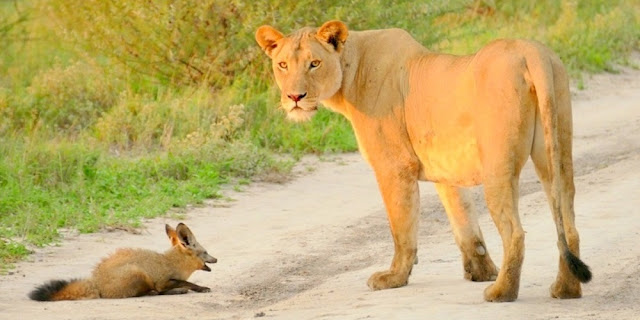 These images document a lion pride on a typical hunt. When a lioness sees an injured fox cub laying in the middle of the dirt road, the group stops. The fox is in terrible health, having suffered a spinal injury and broken back legs. He begs the strong lioness for assistance in a desperate manner.
Strangely enough, the lioness’ maternal instincts take over and she decides to save the helpless baby fox. She directs her pups not to disturb the defenseless fox as she stands by him. But the other pride members don’t like this choice.

A vicious lion soon confronts the lioness about this out of the ordinary arrangement. He doesn’t get why she would defend a simple target. The kind lioness, however, honors her commitment to save the little fox at all costs, even if it means going up against her own family. 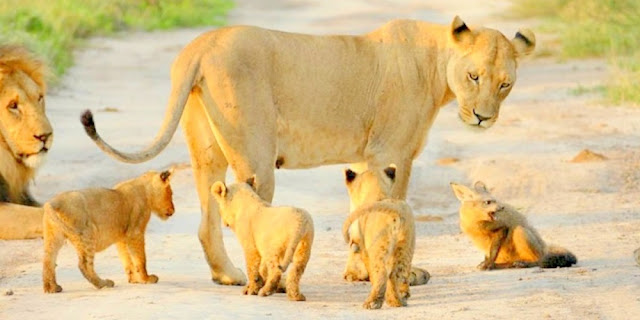 Finally giving in to the lioness’ demands, the lion departs to leave the fox alone. After some time, the fox tries to stand up and finds his way back to his house. He bids his adoptive mother farewell before vanishing into the forest. This remarkable deed by the kind lioness has completely astounded us!
Watch the kind lioness defend the injured fox despite all odds by clicking the video link below!