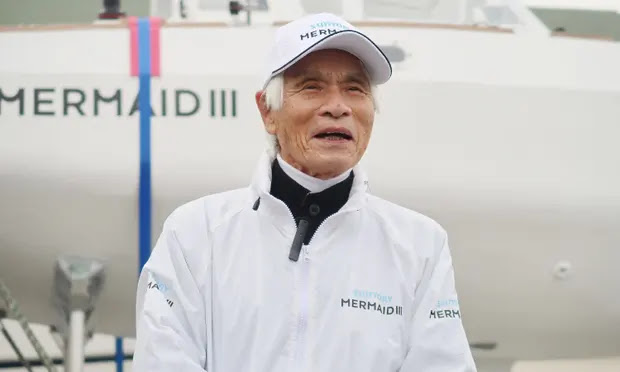 After being the first person to accomplish the feat successfully in 1962, yachtsman Kenichi Horie repeats the maneuver.
Kenichi Horie admitted before starting off that his sole concern about sailing by himself nonstop across the Pacific Ocean was his advanced age. The 83-year-old, who is referred to as “Japan’s most renowned yachtsman,” demonstrated on Saturday that it was not an issue after all by becoming the oldest person to complete the challenge.

The record-breaking octogenarian, who in 1962 also became the first person to successfully attempt the feat, landed in the seas off the Kii peninsula in western Japan at 2.39am local time after spending more than two months at sea.
He had a motivational message for the entire globe after navigating the biggest body of water on earth. As he traveled from Shikoku Island to Wakayama, he spoke to CNN over a satellite phone, encouraging them to “don’t let their goals only stay as dreams.” “A lovely life awaits. Have a goal and strive toward obtaining it.”

On March 27, he departed San Francisco, California, on the 990 kilogram, 19 foot long Suntory Mermaid III, which was made just for his 5 foot frame. He claimed that some aspects of the journey were difficult, and he contacted his family at least once every day to make sure they weren’t concerned.
Horie, who made no port visits, was found on April 16 off the island of O’ahu in Hawaii. On Saturday, he was scheduled to arrive in Cape Hinomisaki. From there, he would be towed to Shin Nishinomiya Yacht Harbour, where he will attend an arrival ceremony in the city of Nishinomiya in the Hyogo Prefecture.
Horie has crossed the Pacific in a variety of boats, including ones propelled by solar panels and foot pedals and fashioned out of beer kegs, whiskey barrels, and aluminum cans. His physical preparation for his trips is nonexistent. “I’m always in good health and great,” Before embarking on his most recent journey, he told the San Francisco Chronicle, “No overeating, no overdrinking.
When asked if he was worried about his trip, he said, “Nothing at all. Possibly simply getting older
He successfully navigated his ship from Japan to California in 1962, when he was 23 years old and worked as a spare parts salesman. He accomplished this feat as the first person to traverse the Pacific Ocean non-stop.
He recalled his first time: “I had the faith that I would make it; I just wanted to take on the task.” But he acknowledged that having only a radio during a storm occasionally made him feel nervous. Throughout the trek, he subsisted on rice and tinned food.

He spent 94 days at sea without a passport or money, and after sneaking past San Francisco’s Golden Gate Bridge in a 19-foot wooden boat, he was apprehended but quickly freed and given a visa in recognition of his bravery.
In an interview with CNN, he said, “I didn’t imagine I’d be sailing at 83, but I’m still healthy and I didn’t want to miss this chance.” “I want to keep trying because challenges are interesting.”
The National Maritime Museum in California still houses the Mermaid, the first vessel he used to traverse the Pacific. Recall for a minute, if you will, the deed of a young Japanese who loved the boat and the United States of America, according to a plaque that Horie contributed.

We need your help with a simple favor. Every day, millions of people look to the Guardian for unbiased, high-quality news, and we now receive financial support from readers in 180 different nations.
We think everyone should have access to information that is based on facts and science, as well as analysis that is anchored in authority and integrity. Because of this, we took a different tack and decided to keep our reporting accessible to all readers, regardless of their location or financial situation. More people will be better informed, unified, and motivated to take significant action as a result.

A worldwide news organization that seeks the truth, like the Guardian, is crucial in these dangerous times. We are unique in that our journalism is free from commercial and political influence because we don’t have shareholders or billionaire owners. Our independence gives us the freedom to tenaciously look into, confront, and expose those in authority at a time when it has never been more crucial.