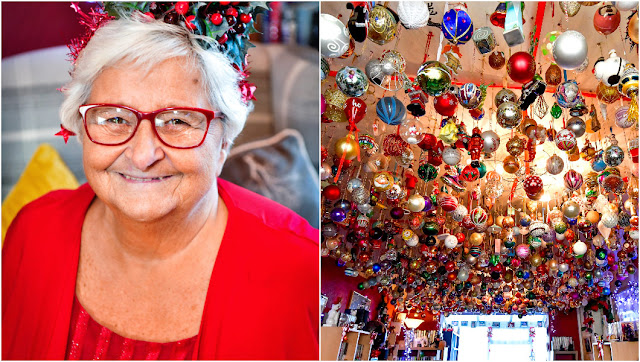 A 79-year-old woman has shown to be the finest at decorating when it comes to organizing the best and most joyous Christmas. In December 2021, Sylvia Pope, often known as Nana Baubles, reportedly surpassed her previous record for owning the greatest collection of Christmas bauble ornaments. More than 1,700 of the exquisite hanging decorations are in her collection.
Pope, who resides in Swansea, a city in Wales, amassed such a big collection of Christmas ornaments that it has come to define her and earn her fame. Her decorations are quite distinctive, which makes her collection stand out from the competition. They originate from a wide variety of sources, including retail establishments and special locations that Pope’s family has been to over the years. They are available in a wide variety of sizes, shapes, materials, and colors.
Beautiful ornaments from Pope’s collection are displayed both inside and outside of her home, where they hang from the ceilings and are placed on display for everyone to view. Nana Baubles now has a Guinness World Record for owning the greatest collection of Christmas bauble decorations, allowing even more people to admire her collection throughout the world.
While the happy woman has plenty to be thankful for this Christmas season, she has even more surprises in store for everyone in the years to come as she aims to grow her bauble collection to even greater heights. Continue reading to learn more about Pope, who is jokingly called Nana Baubles, and her beautiful Christmas decorations.

Sylvia Pope turns 79 on Boxing Day and has to start putting up her bauble ornaments in September!

Her Expanding Selection
Pope, who reportedly had 1,760 hanging ornaments in total, set a Guinness World Record for having the largest collection of holiday decorations in December 2021, according to the Swansea Bay News. Guinness World Records’ Editor in Chief, Craig Glenday, stated:

“Records like this certainly put a smile on your face at a time when we all need a little holiday happiness. Christmas is undoubtedly Nana Baubles’s favorite holiday, and she’s turned her home into a record-breaking winter paradise. It’s fantastic to be able to spread her holiday cheer to the rest of the globe.
In 1999, Pope initially became enamored with the distinctive decorations and was motivated to establish her own collection. She explained, “My son, who resided in Brighton, invited us to spend New Year’s with him. “We went to a friend’s house for a drink, and as I entered, the ceiling was decorated with ornaments. It was wonderful.
Since then, Nana Baubles has purchased the ornaments by the box and throughout the years, has also received many as presents. According to the Swansea Bay News, even though not all of them are traditionally spherical or have holiday themes, they nevertheless contribute toward her sizable collection. They resemble a Christmas ornament more than a bauble, don’t you think? King said,
Disney figures, phone boxes, and decorations in the shape of food are among the items in Pope’s collection. Others have sentimental importance as well, such as the little red ornament she received from her great-grandson and a piece of Royal Doulton made in honor of Queen Elizabeth II’s Golden Anniversary. Swansea Bay News reports that Pope expects to have more than 2,000 ornaments for Christmas either next year or the year following.