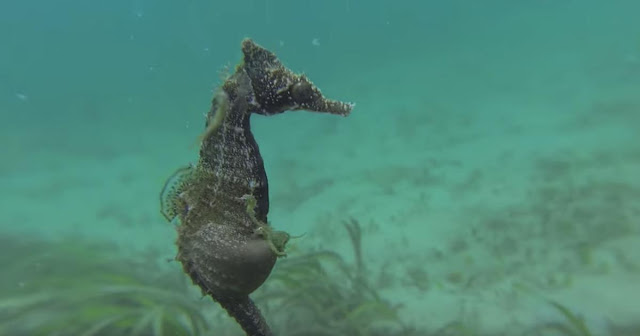 Meagan Abele and Clayton Manning had a lucky day when they went scuba diving in Nelson Bay, New South Wales, Australia, off the shore of Little Beach. They simply happened to stumble onto a once-in-a-million underwater sight, which the two observed and captured.
A little fish that was hardly seen but had a large belly was swimming along the ocean floor. Without knowing what would happen next, they opted to shoot this strange-looking male White’s seahorse after identifying it as such. 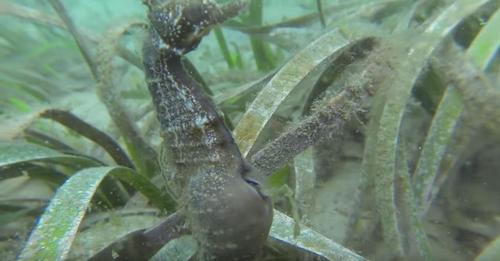 The group got up up and personal with the seahorse using their underwater camera. A little green thread was then seen emerging from its tummy. When you first watch the video, it appears as though it may be a piece of the seagrass encircling the seahorse.
However, after a few more seconds, you can see that it’s actually a little baby seahorse attempting to swim free from his father’s tummy and into the ocean. Other siblings and sisters also start to swim freely and float up with the tide, not just that small baby. 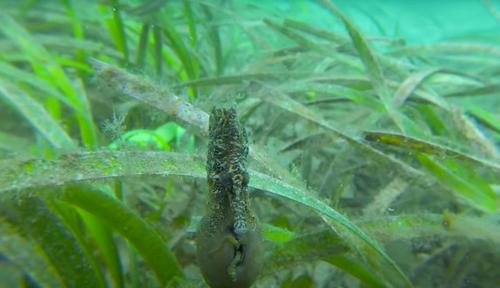 Depending on the species, male seahorses can give birth to up to 2,000 offspring at once, according to National Geographic. Less than five seahorses out of every 1,000 survive to adulthood, resulting in thousands of seahorse births. Although it may sound like a lot of work, their gestation period is just 10 to 25 days.
The video demonstrates how the seahorse babies are not supported by their parents after birth. They use whatever means they can to survive on their own, which may explain why their survival rate is so poor. According to Project Seahorse, a marine conservation organization, their species is currently in danger of going extinct due to threats to its habitat and overfishing.