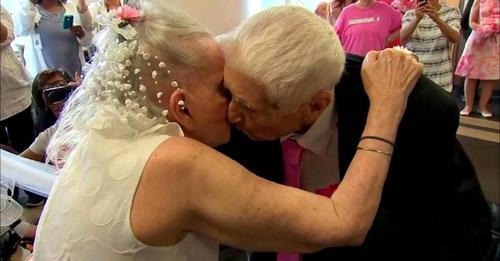 Elizabeth Gfatter was overcome with emotion as she approached the altar and found her husband Charles waiting for her. For more than 75 years, the pair has been committed to one another.

Charles and Elizabeth just relocated to a senior community in Poughkeepsie, New York. In order to prove to everyone that their love is still as strong now as it was 75 years ago, Elizabeth and Charles chose to reaffirm their wedding vows when they arrived.

Elizabeth and Charles first met when they were young and began dating in high school. The pair eloped soon after Elizabeth received her degree. But first, things weren’t always simple…
According to Elizabeth, who spoke to ABC News, “We eloped because they didn’t want us to be married yet—they felt we were too young.”
Charles’s father approached his son after the religious ceremony. He was, to put it mildly, dubious.
Karl recalls his saying, “I’ll tell you what, if it lasts longer than a year, I’ll pay you $100.”

Naturally, Karl’s father eventually had to retract his remarks.

After Charles left for the war, their love for one another grew more intense with each passing year. Sadly, the daughter the couple had together passed away in 2015 at the age of 68.
Their unwavering affection for one another, though, has remained constant.

Elizabeth explains, “He just said he loved me, and that’s all that mattered.”