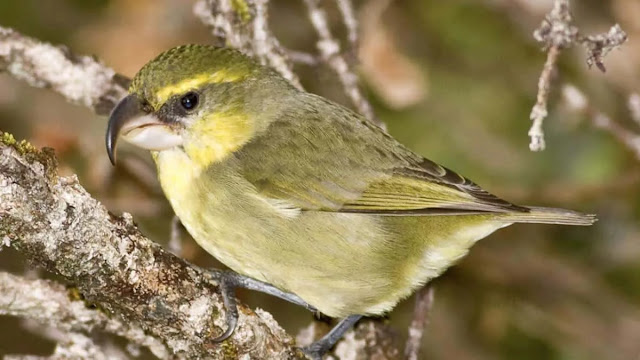 On the slopes of a Maui volcano last Wednesday, a golden, thick-billed bird assumed to have passed away more than 1.5 years prior was spotted alive. According to Newsweek, the discovery is providing scientists hope for the critically endangered species.
The U.S. Fish and Wildlife Services has listed the kiwikiu, also known as the Maui parrotbill, as an endangered species. The little, olive-green and yellow bird used to reside all across Maui and the adjacent island of Moloka’i, claims the Maui Forest Bird Recovery Project. But the number of birds has decreased to about 150 due to people, feral pigs, wildcats, and sickness spread by mosquitoes.
According to Newsweek, the kiwikiu’s distinctive song was identified by Hawaii’s Department of Land and Natural Resources researcher Zach Pezzillo last Wednesday before he saw the welcoming sight on a reserve that includes the Haleakal volcano.
Then it sung 10 or more times while perched in some koa trees across a gulch. It descended into a group of kolea trees, where it remained for the following 20 minutes, calling and foraging busily among the berries, bark, and leaves. To get a better view, I descended down the gulch, Pezzillo stated in a statement made public by Newsweek.

The agency described the re-discovery of this specific bird as “extraordinary” and stated that it “provides a ray of hope for conserving a species.”
The San Francisco Gate reports that five of the seven kiwikiu who were brought to Maui’s Nakula Natural Area Reserve in October 2019 perished from avian malaria, which was spread to the birds by non-native insects. Up until their discovery on Wednesday, the other two were assumed to be dead. A bracelet on his leg served as his unique identification as wild #1 from the 2019 transfer.
As with the others, this bird has been exposed to illness, but has managed to survive, according to Dr. Hanna Moucne of the Maui Forest Bird Recovery Project. “Considering that we still have time to preserve them, this is an incredible indication of optimism for the species. This is an encouraging indicator for the future survival of kiwikiu and other native forest birds in landscapes that have been restored, especially in the absence of sickness and insects.