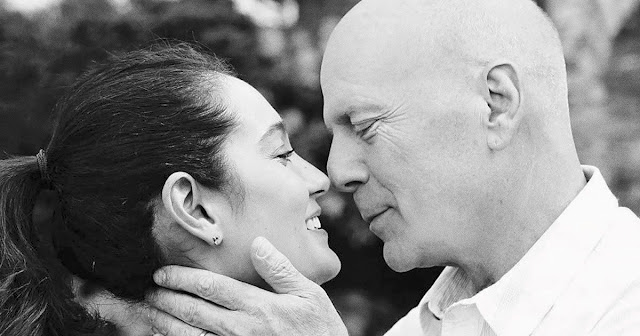 Bruce Willis is a name that many people would include on the list of top actors in Hollywood. The actor is most known for his work in action movies, but he has demonstrated that he has a wide range of skills by appearing in comedies and action blockbusters, among other genres.
Before moving to the movies, he initially established himself on the TV show “Moonlighting.” The movies “Die Hard,” “Pulp Fiction,” “The 5th Element,” “Armageddon,” “The Sixth Sense,” “Looper,” and others feature him in some of the most well-known roles.

Bruce is loved for his outstanding characteristics as a husband and parent in addition to his fame as an actor. He began dating actress Demi Moore in the 1980s, and the two later married and had a family of their own. They had three daughters together who bore the names Rumer, Scout, and Tallulah Willis. But the couple’s union was not meant to last, and they divorced in 2000.
After that, Bruce was alone himself for a while. In 2004, he was also engaged to model Brooke Burns, but things didn’t work out. When he eventually met Emma Heming at the age of 54, the actor started to realize the genuine power of love. The couple welcomed two children, Mabel and Evelyn, shortly after being married in 2009.

Since that time, Bruce has made public remarks on the value of love and how being with his wife makes him happy. The actor’s genuine happiness at having found the love of his life is lovely to witness!

In Idar-Oberstein, Germany, on March 19, 1955, Bruce was given the name Walter Bruce Willis. His American father, who was serving with the American military at the time of his birth in Germany, and German mother raised him. In 1957, the family emigrated to the United States where they resided in Carneys Point, New Jersey.
Bruce had a stutter as a teenager, but he discovered that performing on stage helped him get rid of it. He later joined in the dramatic arts program at his high school after realizing in his adolescent years that he was passionate about performing. Bruce did a variety of odd jobs following his 1973 high school graduation before deciding to try acting. These included working as a nuclear power plant security guard and a private investigator, a position that would prove useful when he took on the role of one in the television series Moonlighting and the film The Last Boy Scout.
Before departing for New York City, he quickly enrolled in Montclair State University’s acting program. Before he ultimately got his footing in the television and film industries, Bruce made an appearance in a few off-Broadway productions. When he costarred with Cybill Shepherd in “Moonlighting” in 1985, he made his debut. He received an Emmy Award and a Golden Globe for the part, which made him known as a humorous performer.

He began concentrating on dramatic and action parts after the show’s run, and has subsequently made appearances in more than 70 movies. His brief appearance on the sitcom “Friends,” his part in “The Sixth Sense,” and his portrayal of John McClane in the “Die Hard” film series are some of his best-loved performances.

Additionally, he has made sure to manage his money well and has made real estate investments. Eugenia Kaye reportedly paid $4.26 million to sell the actress her Trump Place condominium, according to a 2007 New York Observer story. Burce paid for the house out of his own pocket after taking up a $3.408 million mortgage as the trustee of The Bruce Willis Family Trust.
According to CNBC, Bruce offered his Turks and Caicos house for sale in 2013 for a stunning $33 million. The property had already been acquired by the actor in 2000, and construction on the house was completed in 2004.

The actor, whose films brought in roughly $5 billion globally, is listed as the 15th highest-grossing actor in a main role by The Numbers. Based on all of his prior successes in the business world and at the box office, it is simple to see how the actor has amassed such a large wealth. He reportedly has a $250 million estimated net worth, according to Celebrity Net Worth.

Despite being a well-known icon, Bruce said, “Violence, laughter, and ‘Looper'” when asked what he is most known for. However, the actor said, he can’t help but occasionally utter his well-known catchphrase, “Yippee ki yes!” 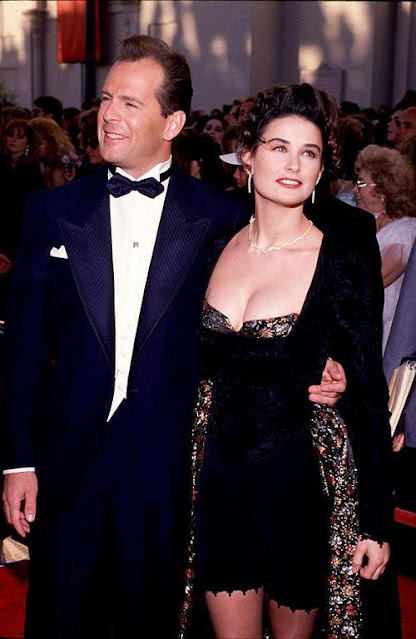 Bruce is highly recognized for his personal life in addition to his professional career. He initially had a very public connection with Moore, whom he had first met at the 1987 “Stakeout” movie premiere. The couple’s romance developed swiftly, and they got married in November of the same year. Soon after, they began a lovely family together with the births of their three daughters, Rumer in 1988, Scout in 1991, and Tallulah in 1994.
There were some issues going on behind the scenes, despite the couple’s outward appearance of happiness. When they announced their separation in June 1998 and then filed for divorce two years later, they startled the world. Their divorce was finalized on the same day that they filed their petition in October 2000, according to Us Weekly. Later on, though, Bruce acknowledged that he was unsure of the reasons behind their divorce. He stated:
I still cherish Demi. We are really near. We will continue to raise our three children together, and we are probably still quite close. We are aware that our commitment to our children is forever. Our bond remains strong. The facility has been designated as such. Living your life and marriage in the spotlight, as occurs to movie star couples, is challenging.
In her biography “Inside Out,” Moore subsequently discussed the problems in her marriage to Bruce. She wrote: “According to Showbiz CheatSheet,”
In our first year together, we experienced a brief infatuation that quickly developed into a full-fledged family. I’m not sure whether we actually knew one another when reality hit.

Years later, the ex-couple demonstrated that despite not making the best romantic partners, they made excellent co-parenting partners. Next year, Moore stated:

I find it ironic to say this, but I’m quite pleased of our divorce. 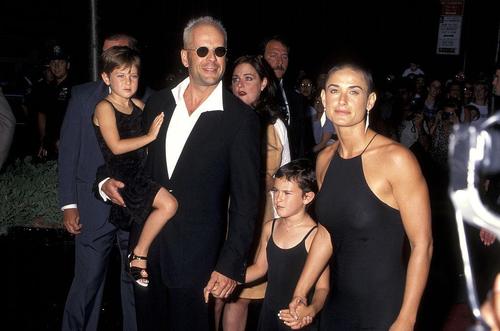 I think we did a fantastic job of making sure our kids knew they were loved, she continued. They both had other relationships throughout the years. Ashton Kutcher was famously married to Moore for eight years, and they had three kids together.
Bruce finally got remarried as well, but not before going through a challenging time alone. In 2004, Bruce became engaged to model Brooke Burns following his divorce from Moore. However, the pair called it quits after ten months of dating and never wed. The actor had been unmarried for a long time and subsequently revealed to W Magazine in 2009 that it had been challenging and that he had been in a “sad place.” He stated:

“I’ve been unmarried and largely miserable for the past ten years. in a dim location. I never considered being in a relationship to be the solution. “I’m alone, but I’m not lonely,” I would assert.

All of that, though, was altered when he met Heming. The actor claims that it just took one date for the couple to fall head over heels in love. In the same interview, he stated as quoted by Access Online:
The Friday before Emma was set to move back to New York, we went on one date, and after that, we fell madly in love. You seldom consider someone you already know when you consider where you will discover the major love of your life. You believe it to be a new acquaintance.
Bruce, who is known for being a devoted spouse, said to W Magazine, “Then I started hanging around Emma, and on a daily basis my life got considerably better.” I changed from saying, “F*** love,” to “Love is absolutely the answer,” the actor continued. 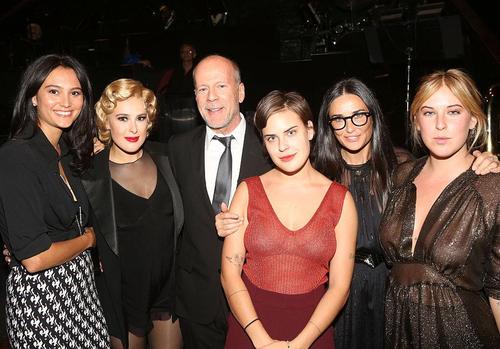 After getting married in 2009, Bruce and Heming now share Evelyn and Mabel as daughters. The actor now has five children, a devoted wife, and Moore as a close friend. This is a long cry from his terrible period spent alone. The large mixed family functions well together and even frequently shoots pictures on social media. We’ve become like a tribe, Bruce told W Magazine.
The couple has been together for almost 13 years and is still going strong. They made the decision to remarry in front of their family, which included Bruce’s ex, Moore, on their 10th wedding anniversary in 2019. When asked about Moore being present, Heming told Us magazine:
She welcomed me into her family just as I had done for her.
She added:
“Once more, she is someone I greatly admire. I am extremely proud of Bruce and Demi for working through their divorce so they could prioritize their kids. I gained so much knowledge and maturity from that, both. She had to be there because it mattered. She attended our first nuptials. She was wonderful to see again. Without her, I couldn’t do it.
The mixed family appears to get along quite well, and to honor International Women’s Day in March 2021, Moore posted a photo of Heming on her Instagram account along with a touching remark. She penned:

“I am proud to call her a friend, and I #SeeHer as family. Despite the fact that our daughters are sisters, there is no word for the bond that unites our family. We are sisters bound in this wild life experience as mothers.
She was also described by Moore as “extremely motivating” and “an extraordinarily stunning woman.” 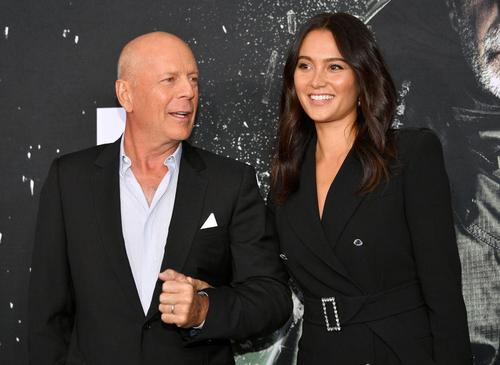 The way Bruce interacts with the ladies in his life is quite impressive. He has shown that it is possible to have a pleasant blended family in which everyone gets along while yet maintaining excellent relations with your ex. Moore even went to the “Comedy Central Roast of Bruce Willis,” mocking her ex-bald husband’s head and professional choices but eventually praising his parenting abilities. He and Moore weren’t very inspirational as a couple, but they have excelled as parents.

Bruce, who has always been a gentleman, expressed his gratitude for the many great ladies in his life. In recognition of Women’s Day, he said:

I have always felt safer among ladies because I worship them.
The Hollywood hunk may be better known for his action-packed film roles, but the actor also has a lesser-known tender side, and that’s why Heming. Bruce was open and honest about his desire to spend as much time as possible with his wife, the joy of his life. In 2017, he stated to Closer:

“I really do not want to be apart from Emma… It’s the most unique connection I’ve ever experienced.

The 43-year-old English actress believes that comedy is essential to a happy marriage. About her spouse, Heming said:
We have a solid basis, and I like laughing with him.
You have to keep laughing because if you stop, you’re going to have problems, she said. She called her hubby “completely wacky” and “our girls’ best parent.” The couple’s relationship is evidence that it’s never too late to find genuine love, despite the fact that they first met when Bruce was already 54 years old.