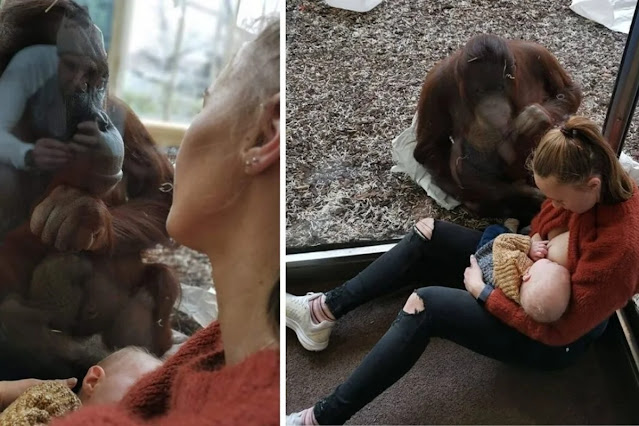 People are being moved by a nursing mother’s experience at Vienna’s Schoenbrunn Zoo, but not without some controversy.
Gemma Copeland posted her experience on Facebook, where it was picked up by the Boobie Babies Facebook group. A female orangutan is shown sitting near to the glass of the orangutan habitat window, staring at the mother and infant while she nurses her young. 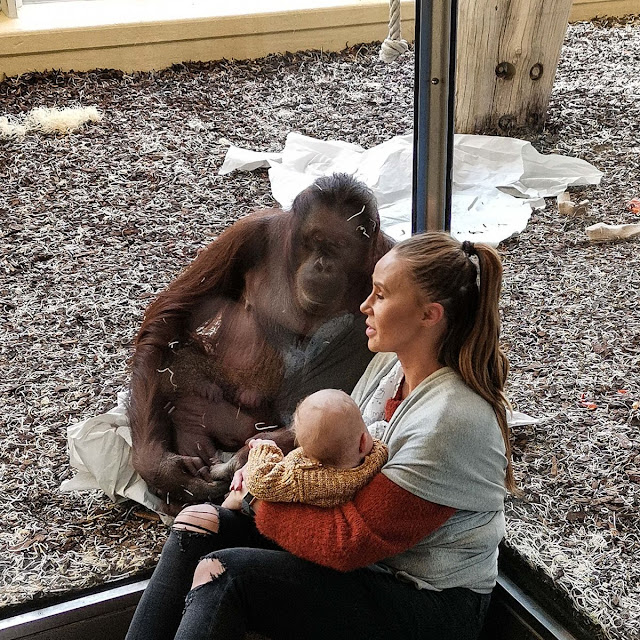 The most strange event of my life had me in tears today when I received feeding support from the unlikeliest of places, Copeland wrote.
“When my partner, kid, and I had a short vacation to Vienna, we went to the Schoenbrunn Zoo. At the conclusion of our day, we stopped by to visit the orangutans, who were joyously playing in their cage. I walked to the window for a closer look and squatted down so my kids could see the orangutan, who was just 5 or 6 feet away. She then stood up, went to the window with a piece of cloth, and sat down next to me. She raised her hand in an apparent attempt to touch my son after looking directly into my eyes. I was immediately in awe of this stunning creature.”

“Since it was calm, I fed my baby while I was sitting there since he was hungry. The orangutan’s reaction left me speechless; she kept turning her gaze between my kid and me “She went on. ” She sat next to me for perhaps 30 minutes, continued to stroke the glass, and then laid down as if to support and shield me.
This has really blown my mind, so I had to share it. Although we may be of different species, today’s nursing connection was a once-in-a-lifetime experience that I will never forget. I’m also really lucky that my boyfriend managed to record everything.”
A post describing a gorilla being trained to nurse by members of the La Leche League, a group that supports breastfeeding mothers, was published to the Facebook page:
“Did you know that La Leche League members actually taught a gorilla mother how to breastfeed? The mother gorilla lost her firstborn child since she didn’t know what to deal with him or her because she was born and reared in captivity. Breastfeeding mothers agreed to sit beside the gorilla’s enclosure when she next became pregnant so they could demonstrate how to do it to the gorilla. A volunteer visited the gorilla after she gave birth and nursed the infant while demonstrating to Mamma gorilla how to do it properly. Mamma gorilla observed, imitated, and successfully fed her young after watching.” 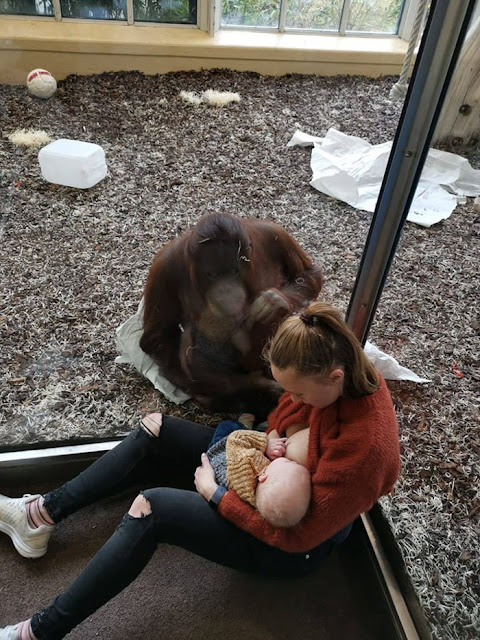 More than 37,000 people have shared the tale, and many commentators have praised how lovely and emotional it was. While some marveled at the beauty of the animal encounter, many also expressed regret at the thought of such a creature being kept in confinement. Debate erupted about whether zoos are good or bad for the animals they house, as it does with almost every post on animals in zoos.
And just as in other disputes, there is a wide range of viewpoints. Some believe that visiting zoos is the best method for people to get to know animals up up and personal, which makes them more concerned with their protection in the wild. Some people agree that keeping animals in captivity isn’t ideal, yet without their labor, many animals would perish as individuals or go extinct as species. Some people believe that keeping an animal in captivity is always bad. On this issue, even animal specialists are divided.

Moreover, not every zoo is made equally. There is little doubt that many animals grown in captivity would not survive if they were suddenly released into the wild, which is why many zoos have shifted more toward a rehabilitation and conservation approach.

Additionally, as breeding is an instinctual behavior for animals, it is debatable whether attempting to restrict natural breeding in captivity falls within the ethical treatment of animals. What about creatures that are now only present in zoos since they are extinct in the wild? When it comes to zoos, there are a million questions and a million uncertain answers.
However, there is one point on which everyone can agree. Whether you believe zoos are beneficial or detrimental, essential or not, they are mostly still around because of how humans have interfered with nature. This creature’s connection with a human mother is driven by the same nature that makes her feel out of place.