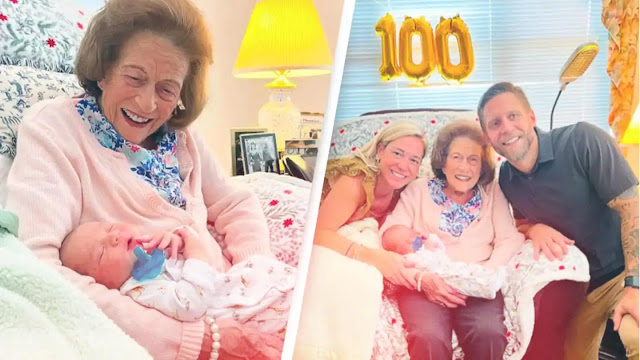 Peg, the matriarch of the family, was reportedly “extremely happy” at the arrival of little Koller, even though she is no stranger to embracing great-grandchildren into the family.
William, Peg’s late husband, and she had 11 kids together. They had 56 grandkids later on, who in turn gave Peg a staggering 100 great-grandchildren.

However, it wasn’t clear for a time if Koller would land the 100th position. According to his mother Christine Stokes Balster, neither she nor her cousin Colleen could be positive if their kid would be Peg’s 100th great-grandchild because they were both expecting to give birth around the same time.
“The goal was to reach 100. My cousin Colleen gave birth to the 99th great-grandchild, who is incredibly healthy and lovely, only a day before I did “stated Christine.

They are “simply thrilled, lucky to have a couple more babies joining this beautiful family,” she continued.

Peg may now start looking forward to her next major milestone—turning 100 in November—after having amassed 100 grandkids.

Even though it might be difficult to believe now, the matriarch’s vast family nearly didn’t exist. When she was a young girl, Peg had her heart set on living a childless life in a monastery and becoming a nun.
According to Metro, Peg only changed her mind about not donning the veil after meeting her future husband William and being persuaded by him to get married and create a family.
In the end, Peg and William had so many kids that it was practically difficult to gather everyone together at once.
In order for everyone to have time to be with one another, Christine emphasized that the family had to complete significant activities in “heats.”