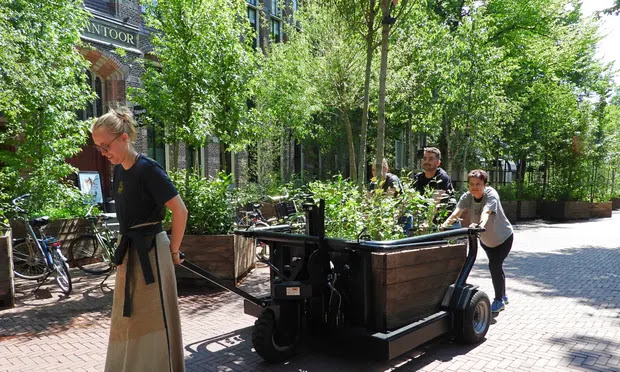 A glimpse of a greener future may be seen in the spectacle of leafy ash, oak, and elm meandering through Leeuwarden’s streets.
It is more of an amble than a marathon. A “walking forest” of 1,000 trees, however, was never going to move quickly. In order to give people a chance to see an alternative, more environmentally friendly future, volunteers have been moving native trees that have been planted in wooden containers along a 3.5km length through the center of the northern Dutch city of Leeuwarden since May.

The initiative is named Bosk, which in local Frisian means “forest,” and is being assisted by Johan Lakke, a student at the University of Groningen. “We are a generation that has practically lost all hope,” he adds. He says, “This initiative gives me hope.” It demonstrates that you can do anything if you’re crazy enough to think outside the box.

Lower land temperatures are a result of more tree cover in urban areas, which is a design element that is becoming more and more important in a warming world. According to a research that included almost 300 European towns, urban trees can reduce the land’s surface temperature by up to 12°C during the summer.
Bosk was the creation of late landscape architect Joop Mulder and landscape architect Bruno Doedens. It was inspired by Doedens’ 2021 essay Planet Paradise, which explored how people interact with the natural environment. Doedens claims that as a species, we are acting like teenagers who don’t want to tidy their rooms at the moment. “We must mature and stop destroying things. We must look after our environment. 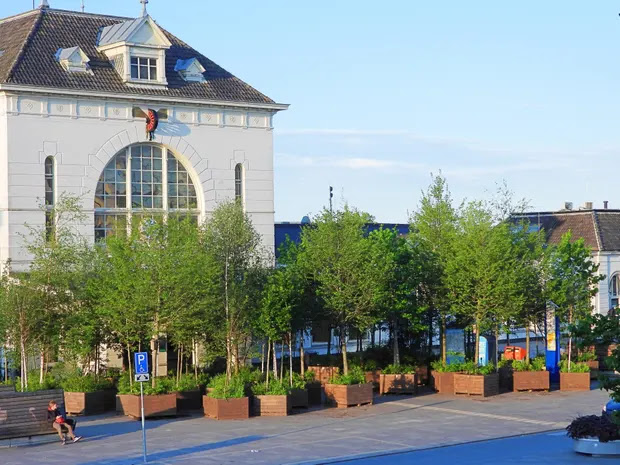 The Bosk program, which is a part of Arcadia, a triennial art festival, also includes discussions, installations, and performances centered around the subject of re-connecting with nature. This is in addition to the magnificent spectacle of the “walking” forest. The creative director of Arcadia, Sjoerd Bootsma, states: “We need art and artists to help us envisage other possibilities.”

Stationsplein, which is located in front of Leeuwarden’s train station, was the first stop on the walking route. Sjoukje Witkop, the general manager of a neighboring hotel, claims that because of the trees’ soothing impact, customers felt at ease right away. Witkop was motivated to put 10 substantial planters outside the hotel. She asks, “Why didn’t we have trees there before?”

There are places to sit between the trees when the “walking” forest is still. For guests to relax in the shade, several hotels provide picnic hampers.

The 1,000 trees, which were placed in 800 wooden containers, are made up of 60–70 natural species, including alder, ash, elm, maple, oak, and willow. Each one includes a QR code that contains information on the species, typical lifetime, and ideal soil type. The city’s gardening crew is informed via a soil sensor when the trees require watering. Doedens claims that these trees are among the best-kept in the entire world.
People of various ages, genders, and backgrounds have volunteered to relocate the trees, and there has been overwhelmingly positive neighborhood support for the endeavor. BoskBier, a unique beer created by a local brewery, donates 10 cents from each sale to Plan Boom, a national tree planting initiative.

The leaders of other Dutch city centers have also traveled to explore what may be done. According to Bootsma, “Even churches want to be a part of Bosk.” 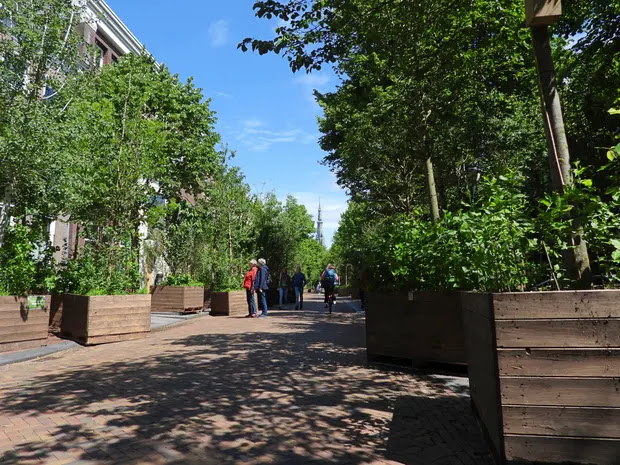 Doedens claims that because people appreciate the trees so much, they want them to remain. He laughs and continues, “We made a ‘walking’ forest and people want us to leave it in place.
However, not everyone is ecstatic. Some believe the endeavor is a time and money waste. Others detest having to park somewhere for a week or that certain areas are inaccessible to cars due to the trees. The project manager for the municipality of Leeuwarden, Almar Dam, exhorts them to consider the wider picture. Normally, he explains, “the streets are so busy, and you have to be careful because drivers will run you over with their automobiles.” “But take a look at a Bosk place. It’s incredibly serene.
The trees will be planted around the city starting on August 14—100 days after their arrival—including in low-income areas, where there is a dearth of green space. By 2025, Friesland hopes to have the most circular economy in the EU, which will help them cut down on waste, pollution, and biodiversity loss. Doedens is optimistic even though this won’t be simple. He claims, “If trees can change, then so can people.”

How To Train Your Brain To Fall Asleep In 60 Seconds