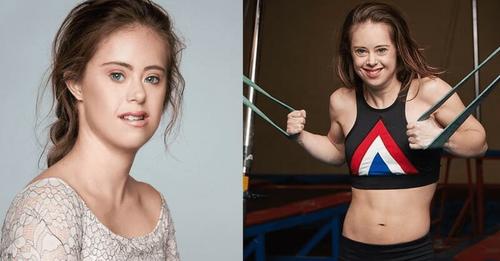 The beautiful movements and amazing acrobatics of professional gymnastics may be so enthralling that those of us who aren’t gymnasts find it difficult to understand how the human body is able to accomplish such feats.

This 22-year-gymnastic old’s prowess is changing the world. But she has Down syndrome and is a four-time national champion.

Chelsea Werner doesn’t see her impairment as a barrier.

Low muscle tone is a sign of Chelsea Werner’s diagnosis, so she started gymnastics as a means to build up her muscles.
This outstanding young woman was preparing for the Special Olympics just four years later!

The parents of Chelsea started seeking for a top-tier instructor to work with her after seeing how much their daughter enjoyed gymnastics and how far she had gone in just four years.

They came upon Dawn Pombo, who saw Chelsea’s talent and respected the effort she put in to realize her goals.
Starting off, it was difficult since Chelsea would need to take frequent pauses and whine that her stomach ached. According to her coach, she could hardly walk one way and then the other on the balancing beam without falling.

Pombo told Today, “I would tell her parents, ‘I’m going to attempt to teach her, you know, a back handspring.'”
“Oh, there’s no way, they say. Are you serious? No, I believe she can succeed.
Chelsea started practicing for 16 hours a day because she was determined to show off her skill.
Pombo saw in her the potential to be someone special, and pushed her just as hard as any other gymnast she had trained with.

Chelsea has already won four national championships in the Special Olympics as well as the International Down Syndrome Foundation World Championships title, demonstrating the success of her perseverance and hard work.
She further made an appearance as a special guest at the NCAA women’s gymnastics final this year.

Chelsea is focusing on modeling today. Despite the significant difficulty, this 22-year-old does not give up easy.
Her perseverance and excellent work ethic have really benefited her.
Chelsea has been on the Teen Vogue cover, participated in the New York Fashion Week runway show, and toured all over the world for major brand campaigns.

“I’ve always like being in front of the camera, which is how I came up with the moniker “Showtime.” I perform at my best whenever there is a camera or an audience. I also enjoy traveling. She bragged, “My first modeling gig was for H&M, and I shot it in Havana, Cuba.

The world now holds her in high regard.

Chelsea expressed her admiration for becoming a role model by saying, “I adore it! It’s something that young child’s parents frequently say to me. I feel really pleased and delighted if I can assist someone find hope.