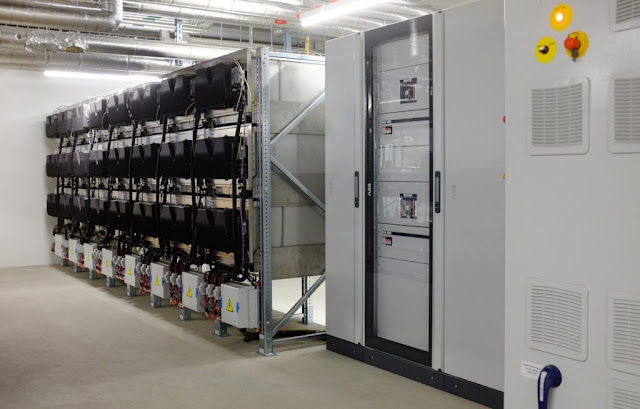 Meltwater from thawing snow pours down rivers in the Pacific Northwest in the spring, and the wind is typically howling. These pressures spin the region’s numerous power turbines, generating a surplus of electricity at a time when temperatures are moderate and energy demand is low. However, batteries are unable to retain enough of this seasonal surplus electricity, which might be used to run air conditioners in the summer.

Pacific Northwest National Laboratory (PNNL), a Department of Energy national laboratory in Richland, Wash., is working on a battery that might fix this issue. They demonstrated how freezing and thawing a molten salt solution forms a rechargeable battery that can store energy inexpensively and effectively for weeks or months in a recent work published in Cell Reports Physical Science. This capability is critical for moving the American grid away from fossil fuels, which emit greenhouse gases, and toward renewable energy. President Joe Biden has set a target of halving US carbon emissions by 2030, which will involve a significant increase in the use of wind, solar, and other renewable energy sources, as well as ways to store the energy they generate.

The majority of ordinary batteries store energy as chemical processes that are about to occur. When the battery is linked to an external circuit, electrons go from one side of the battery to the other, creating power in the process. Charged particles called ions flow through the fluid, paste, or solid substance that divides the two sides of the battery to compensate for the change. Even while the battery is not in use, the ions spread slowly over this medium, known as the electrolyte. The battery loses energy as this happens over weeks or months. In just one month, certain rechargeable batteries can lose over a third of their stored power.

Developing a battery that can survive repeated heating and cooling cycles is no easy task. The battery expands and contracts as the temperature varies, therefore the researchers needed to find materials that could withstand these variations. Vince Sprenkle, a strategic adviser in energy storage at PNNL and a co-author of the current work, says, “What we’ve seen before is a lot of active research to make sure you don’t have to go through that heat cycle.” “We’re saying, ‘We want to go through it, and we want to be able to survive as a crucial feature.'”

The ultimate result is a rechargeable battery constructed of low-cost components that can store energy for long periods of time. “It’s a terrific example of a viable long-duration energy-storage technology,” says Aurora Edington, policy director of the electrical industry trade group GridWise Alliance, who was not involved in the study. “I believe we should encourage such initiatives and see how far they can get toward commercialization.”

The method might be especially beneficial in places like Alaska, where summer sunshine is nearly constant and energy consumption is minimal. Summer solar power might be used to meet winter electricity requirements thanks to a battery that can store energy for months. “The seasonal changing potential is what makes the freeze-thaw battery so appealing,” says Rob Roys, chief innovation officer of Launch Alaska, a nonprofit that strives to expedite the implementation of climate innovations in the state. In a distant section of his state, Roys plans to test the PNNL battery.

Heating the batteries might be difficult, especially in cold environments. Even in mild settings, the heating process consumes roughly 10 to 15 percent of the battery’s capacity, according to Li. Later stages of the study will look for ways to reduce the required temperature and include a heating mechanism within the battery itself. This functionality would make the battery easier to use for the user and might make it acceptable for household or small-scale application.

The experimental technology is now focused at utility-scale and industrial applications. Sprenkle sees tractor-trailer truck containers containing huge batteries positioned alongside wind farms or solar panels. The batteries would be charged on-site, allowed to cool, and then transported to substations, where the energy could be delivered as needed through power lines.

The PNNL team intends to continue developing the technology, but a commercial product will ultimately be developed by industry. “At the DOE, our role is essentially to derisk new technology,” adds Sprenkle. “Industry will decide if it has been sufficiently derisked, and they will take it on and run with it.”

The Department of Energy is attempting to shorten the time between early research demonstrations and commercialization of energy technology. Lithium-ion batteries, for example, were developed in the 1970s but did not appear in consumer items until about 1991, and were not integrated into electrical grids until the late 2000s. Artificial intelligence and machine learning, according to Sprenkle, might speed up the validation and testing of new technologies by allowing researchers to model and anticipate a decade’s worth of battery performance without having to gather data for ten years.

It’s uncertain if adoption will occur soon enough to satisfy decarbonization objectives. “All of these technologies need to be expedited by approximately a factor of five if we are actually striving to meet 2030, 2035 decarbonization objectives,” Sprenkle adds. “You’re looking at things that must come online, be verified, and be ready to pass over in the next four to five years in order to have a major impact.”

Your electric car can power your house in the future