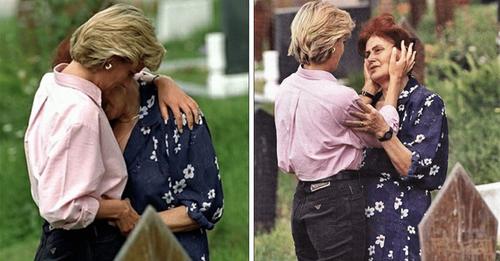 Even though Princess Diana is no longer with us, her legacy will live on.
Despite having gone away more than 20 years ago, the Princess of Wales is still a source of inspiration for people all around the world. Even today, when we hear tales about her unfailing generosity and special sensitivity, we are reminded of the reason she earned the moniker “The People’s Princess.”
There was no region too distant and no barrier too large to traverse in the interest of assisting others, according to Diana. We reflect on one of the many instances she demonstrated that she was simply too good for this world on the eve of the 22nd anniversary of her passing.

Diana went in Bosnia on a humanitarian tour just a few weeks before her terrible death on August 31, 1997, as part of her campaign to increase awareness of landmines.
Ken Rutherford and Jerry White accompanied Diana on the journey, which turned out to be her final of its sort.
The duo described their experience for the HBO documentary “Diana, Our Mother: Her Life and Legacy” in 2017, which was almost exactly 20 years after she was assassinated.

Rutherford and White told various tales of their time spent with Diana in Bosnia while speaking with Entertainment Weekly, but White’s tale stood out maybe the most.
On August 10, 1997, there was an unforeseen diversion to the Sarajevo War Cemetery.

On the final day of our three-day excursion, White recalled: “The sight of her in a graveyard in Sarajevo [still bothers] me. It was not anticipated. It was never planned to be there. Diana, though, repeatedly remarked to me, “I can’t get this image of me in a graveyard out of my head.”
She inquired as to if a cemetery was close by since she thought we ought to visit it. Jerry, it’s funny, but I got this sense or this mental picture of being in a graveyard. There was no time for this diversion because we were running behind schedule for the closing celebration, but Princess Diana suddenly appeared determined.

So, we took a detour to the former Olympic stadium, which had been converted into a sizable war dead cemetery. I watched as Diana was buried among several grave markers. I realize now that it was creepy. She moved carefully past gravestones and even bushes of yellow roses.
“She came upon a Bosnian mother who was extremely upset as she attended to her son’s grave. This mother didn’t speak English, and Diana didn’t speak Bosnian. They simply did an embrace. Mother to mother, so closely, so physically, so emotionally.

White said, “It was classic Diana, reaching out, blotting the mother’s face and tears. I still only have one other framed image of Diana in my house.
“After she passed away in Paris a few weeks later, I started to wonder if the Princess had anticipated dying and being buried. I don’t know, but it’s possible Diana foresaw her death instinctively or psychically. When I think back on this stirring, spontaneous, unexpected, and in some ways predictive event, I still get shivers.

That sounds just like the Diana we all like and remember. She never placed herself first and had no boundaries when it came to dreaming of a brighter future for all of us.