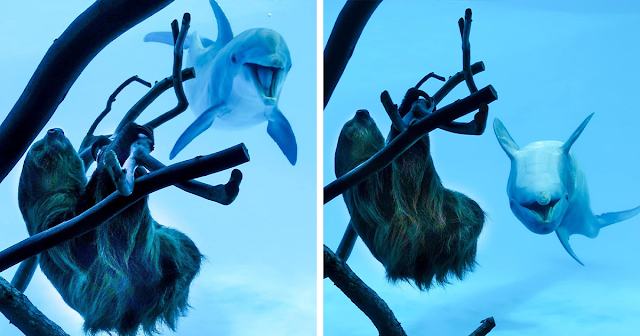 As part of the Texas State Aquarium’s animal enrichment program, two dolphins named Liko and Schooner and Chico the sloth met earlier this month. When the dolphins first saw their furry friend, they were so intrigued and thrilled that one of them made a hanging sloth impression by flipping upside down.

According to Insider, dolphins are typically concerned about changes in their surroundings since they are clever mammals, according to Seamus McAfee, the zoo’s manager of marketing and communication. And the addition of Chico, who hung on a limb and appeared to be dozing as the dolphins watched, undoubtedly piqued their curiosity. 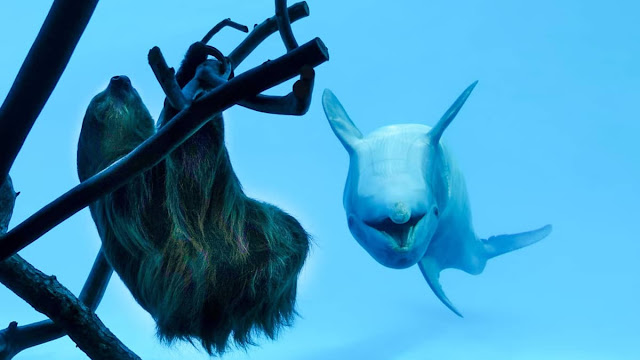 In his interview with Insider, McAfee added that as part of their enrichment, “our four dolphins — Shadow, Kai, Liko, and Schooner — often get opportunities to meet other Aquarium inhabitants, and in the past they’ve gotten to meet baby gators, an African serval, a red-tailed boa, and others.” But unlike dolphins, who frequently welcome new zoo visitors, Chico appeared to be largely unaware of the two observers.
When Chico was carried to the dolphins’ underwater view to meet them, “in typical sloth form, he was quite lethargic, but he did open his eyes a couple times to check them out,” McAfee said to Insider.

The zoo’s efforts to carry on with business even when it is shut down because to the COVID-19 outbreak include these animal gatherings. Along with maintaining routine tasks like cooking meals, feeding the animals, and cleaning their habitats, the aquarium staff continues to provide the animals with additional enrichment opportunities. 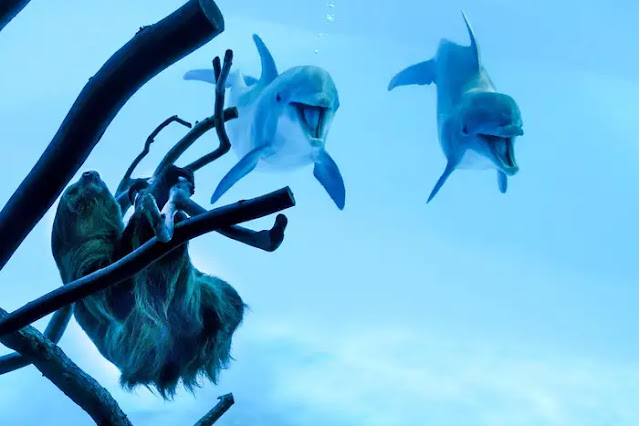 Similar initiatives have been launched by other struggling zoos and aquariums across the nation to continue interacting with their patrons and to generate exposure. According to a news release, the Cincinnati Zoo & Botanical Garden started an online video series displaying its animals with virtual safaris when it closed its doors to the general public.

The world-famous, 1,300-pound hippo Fiona, who gained media attention after she was born six weeks early, was a featured animal during the zoo’s inaugural digital safari, which took place on March 16. The zoo received a tremendous response on social media in advance of Fiona’s webcast, with its Facebook announcement reaching over 18 million people and garnering hundreds of thousands of likes. The Texas State Aquarium shares stories like Chico, Liko, and Schooner’s play date in an effort to interact with its online audience. 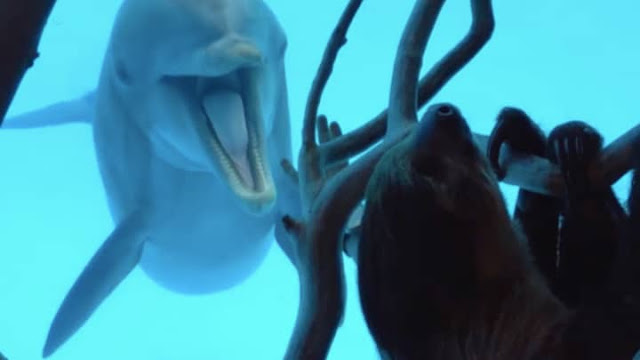 A zoo employee told Bored Panda, “We’re trying to share as many of these stories with our guests and viewers throughout the world to keep them engaged, educated, and entertained when they’re at home.” Currently, social media articles like this one, virtual tours of our animals, and daily live distance learning programs have been the most successful for us.