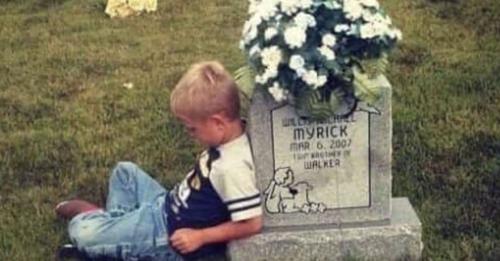 There is always a unique bond between siblings. However, twins always elevate that bond to new heights. However, from a pair of identical twins, one could not even survive to be born.

Willis and Walker Myrick were intended to be identical twins who traveled the globe together. But terrible events prevented one of them from entering this planet.
Willis suffered from twin-to-twin transfusion syndrome (TTTS) before the twins were born, and as a result, he died inside the womb.
The two boys still have a particular bond despite not having met in this life, according to their mother Brooke Davis.
Just one of those things, I suppose. He’ll always have a connection to his sibling, I really think,” she asserts.

The little kid frequently had dreams about his twin brother, Willis, and his parents would accompany him to Willis’ cemetery, where he would have in-depth chats with his deceased sibling. Sometimes, Davis would capture these heartwarming interactions on camera.
Walker visited his brother’s cemetery in 2012 when he was five years old and had just started kindergarten. He told his brother everything about his first day of school while leaning against the tombstone.
According to Davis, “Willis actually lives through Walker, and I believe he watches over him.”
According to Davis, the little child would be so eager to meet his sibling that he would exit the car before she did.

Walker said in a video that was recorded on Christmas Day 2016 when he was nine years old, “I still remember my brother today, and he watches over me all the time.”
Davis claims that Walker’s relationship with Willis has brought her serenity and made it easier for her to accept the death of her child than it would have been otherwise.
Davis, though, is determined never to forget Willis. The twins’ birthday is celebrated by the family each year with “The Walker and Willis Birthday Walk.” To raise money, it is combined with an auction and a t-shirt sale.
The event’s objectives are to increase understanding of TTTS and provide $2,500 yearly to the TTTS Foundation. For families going through what she did with TTTS, Davis also offers advice.

“I would assure them that their children would never abandon them,”

This is especially true given how Walker still cherishes and remembers his identical twin, who never even made it into the world.

We extend the family our love and wish them success as they work to spread the word and gather money.