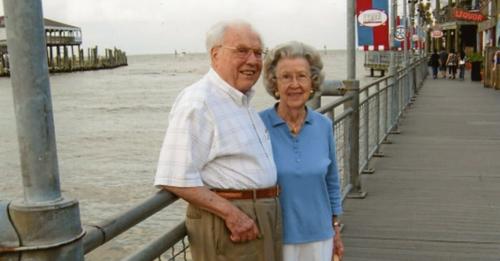 Many may aspire to, but few will really achieve, the distinction that a couple in Austin, Texas has.
According to Guinness World Records, John Henderson, 106, and Charlotte Henderson, 105, just broke the record for the oldest married couple with a combined age of 211 years.

And they will commemorate their 80 years of marriage on December 15.

When they were both students at the University of Texas in 1934, they first met in a classroom and fell in love. They exchanged vows in December 1939 and spent their honeymoon in a motel room that cost them about $7.

What then is the key to the couple’s record-breaking marriage and lifespan of more than 100 years?
Living sensibly, John explained to USA Today in 2017. “We never go overboard. Eat sensibly. Rest well. Don’t drink too much. Avoid overeating. And be active frequently.
John is the oldest living former UT football player and one half of the oldest married pair. The pair has also gone to at least one UT football game every season for the previous 84 years.

“When John retired, we had a great time. We did a lot of traveling, Charlotte remarked. We simply keep ourselves occupied all the time, which I’m sure helps.
The pair now maintains an active lifestyle at Longhorn Village, a senior living facility for UT employees and alumni.

Greetings and best wishes to the happy couple as they mark many more wedding anniversaries!